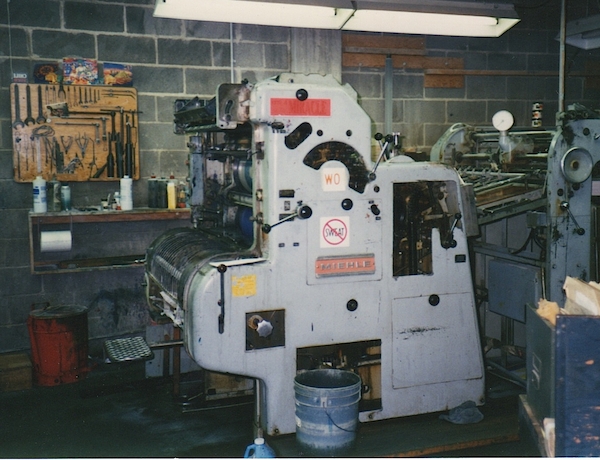 Great video explaining how the posters of the late 1960s were printed, using offset lithography. 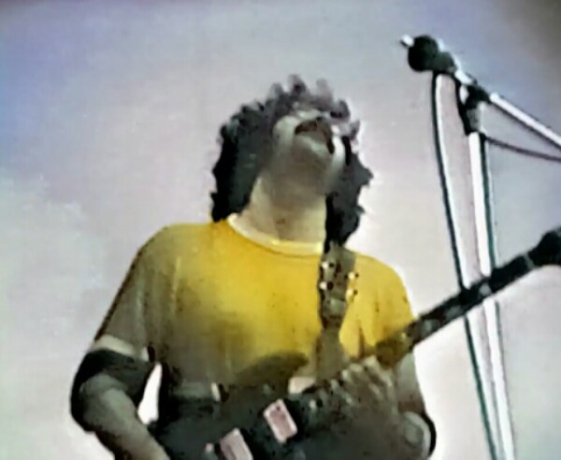 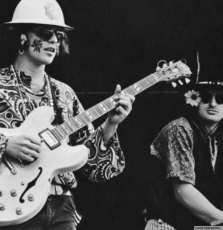 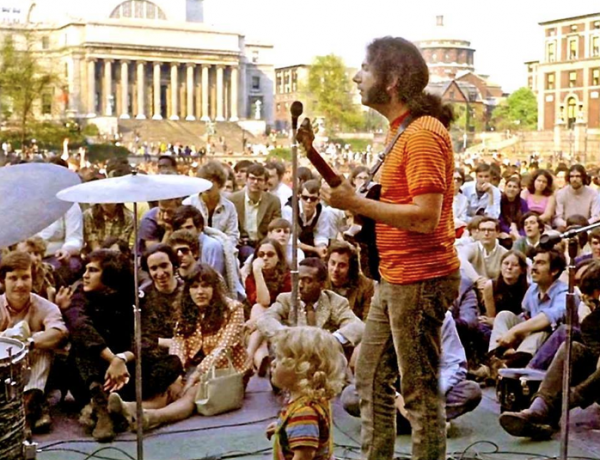 May 3, 1968, the Dead appear on the campus of Columbia University out of nowhere. Audience is not clear on what's going on - but they know something is happening...

Jerry is sporting huge mutton chops and the band is at it's revolutionary best. 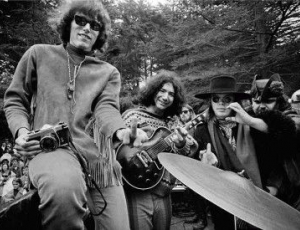 Haight Ashbury Photo Shoot 1967 or so, with Morning Dew

Terrific 9:38 video of the Haight scene from way back when 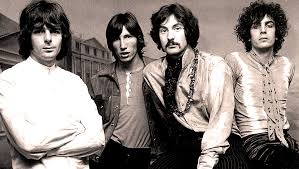 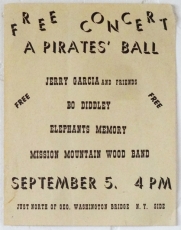 Hells Angels and Jerry Garcia at The Pirates Ball, 1973

This 4:30 video has some amazing footage of the first legendary Pirate's Ball, September 5, 1973, held "just north of the George Washington Bridge, NY Side." This was a Hells Angles party aboard a boat named the SS Bay Belle that sailed around NY Harbor. Footage includes a Hells Angels wedding, Angels flying the colors, women cavorting, and Jerry Garcia & Friends, including Merl Saunders, John Kahn and Bill Kreutzmann. 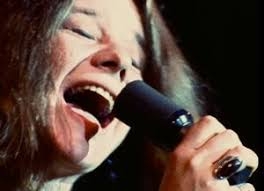 If there is a song that made Janis Joplin, this is it. The quality of the filming, for 1967, is staggering. 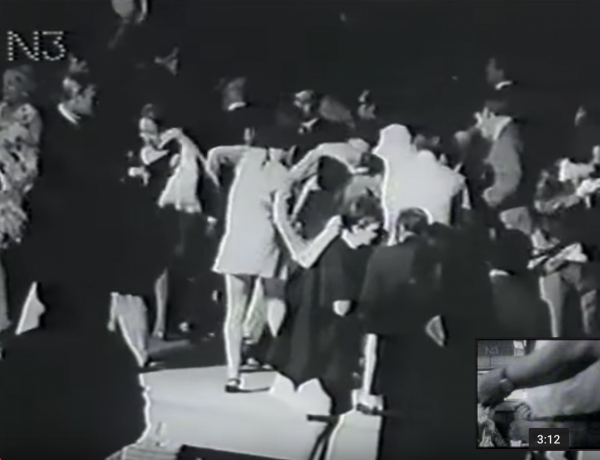 Yes, really. This 3:13 clip from a German documentary features two parts with amazing 1967 footage of Connecticut socialites at Philip Johnson's Glass House in New Canaan. While you don't see the band, they are dancing (rather wildly) to NYC nihilists (my description), the Velvet Undrground. First up is "waiting for my man" about scoring heroin and later in the clip is the sadomasochistic "Venus in Furs," certainly a far cry from the Peppermint Twist. The dancers don't seem to notice.... 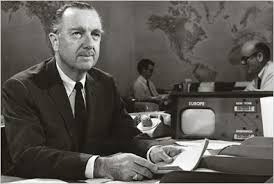 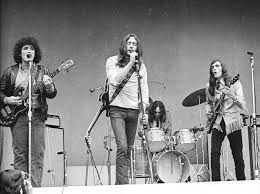 Live video showing Quicksilver Messenger Service with the crowd looking on, wondering who the hell these people are.... 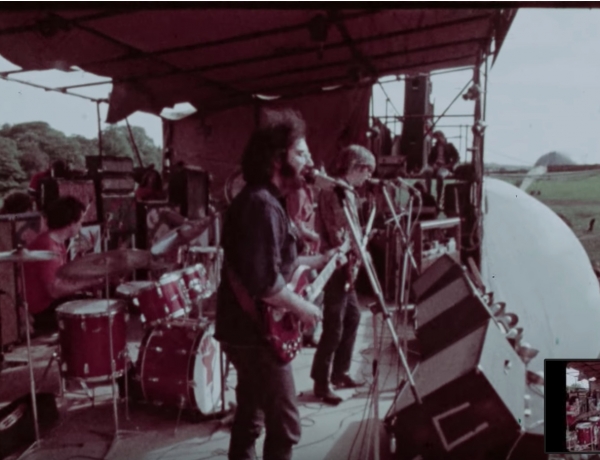 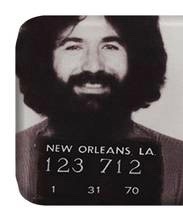 Short and very funny interview with Jerry Garcia about the famous "set-up" bust of the band in New Orleans following a show at The Warehouse with Fleetwood Mac on January 31, 1970. After bailing out their 19-person entourage (including Owsley), they were broke and cobbled together another show the next night and talked Fleetwood Mac into staying as well. About three weeks later, Bill Graham and all of the major San Francisco bands held a Benefit to raise money to help pay the Dead's legal bills - immortalized by this Randy Tuten poster - click "view more" below to see it. 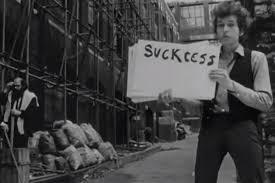 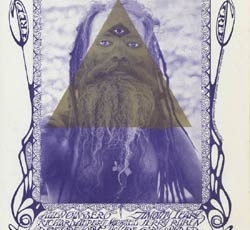 Rather raw footage of the Human Be-In, January 14, 1967. To an extent a protest against the outlawing of LSD in California on October 6th 1966.  Alan Ginsberg and Timothy Leary highlighted. Video is just shy of 5 minutes and Takes You There. 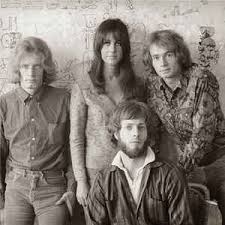 This is one of those YouTube videos that shows still photos while playing the music. In this case we have the Grace Slick and Great Society doing an early prototype of White Rabbit. Almost a totally different song. 1966. The Matrix, tiny club in San Francisco. We know the story. In the early Fall of 1966, Jefferson Airplane vocalist Signe Anderson, pregnant, no longer wanted to tour with the band. They invited Grace Slick to come aboard and the rest was history. Both White Rabbit and Somebody to Love were Great Society songs Grace brought to the Airplane. 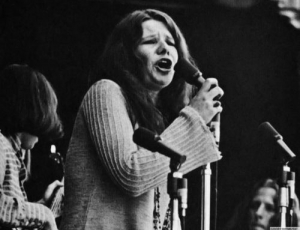 Janis Joplin leads Big Brother & The Holding Company in this quintessential song describing the rock "dance concert" scene in San Francisco. The "Two" in the song title refers to the Avalon and Fillmore, the leading psychedelic venues in San Francisco.  The Monterey Pop Festival held June 16-18, 1967, put the growing psychedelic rock movement on the map and catapulted the careers of Jimi Hendrix (who set his guitar on fire), The Who, Janis Joplin, and Otis Redding. Big Brother's Combination of The Two wound up on the Cheap Thrills album which was the number 1 album for the year 1968.  Note at the end of the video an open-mouthed Mama Cass from the Mamas and the Papas. 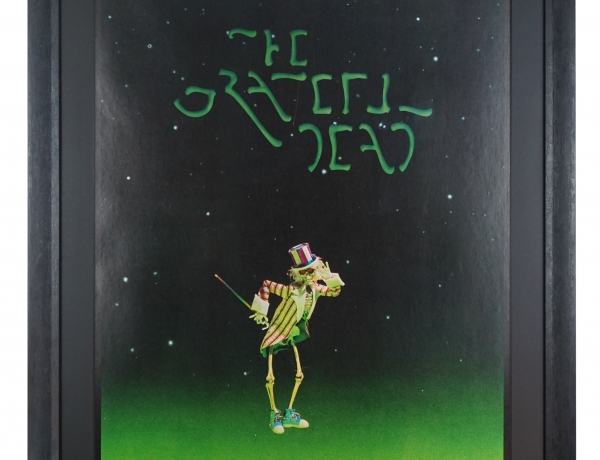 This is a March 2020 remaster of the awesome 11-minute animation sequence by Gary Gutierrez that opens the Grateful Dead Movie made in 1977.  Immortal. 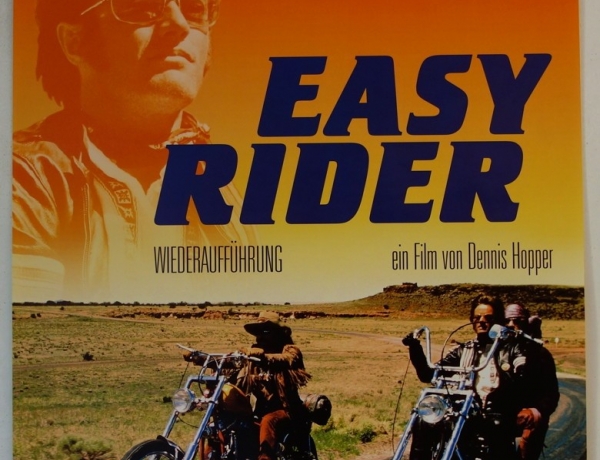 The Bird Song from Easy Rider

The 2-minute song by the very odd psychedelic-folk duo the Holy Modal Rounders would likely be lost to history were it not included prominently in the 1969 cult-classic Easy Rider.  There are two versions that I would like to cite for you - it's the same song but the visuals are different:

This version is accompanied by extemely psychedelic graphics - well worth it.  See that version HERE

In the movie, the song played after Jack Nicholson had joined Dennis Hopper and Peter Fonda on their motorcycles headed east to Mardi Gras in New Orleans.  The clip in the movie is seminal and also well worth the trip. See the movie clip with song: HERE 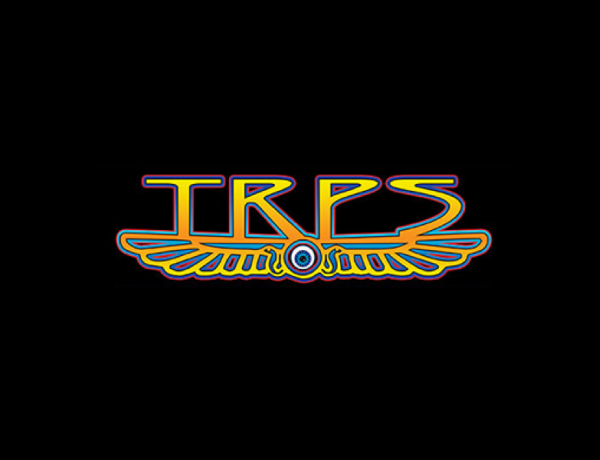 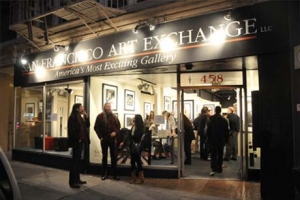 SFAE is a Gallery in downtown San Francisco that specializes in rock photographs, art and memorobilia

View More
Back To Top