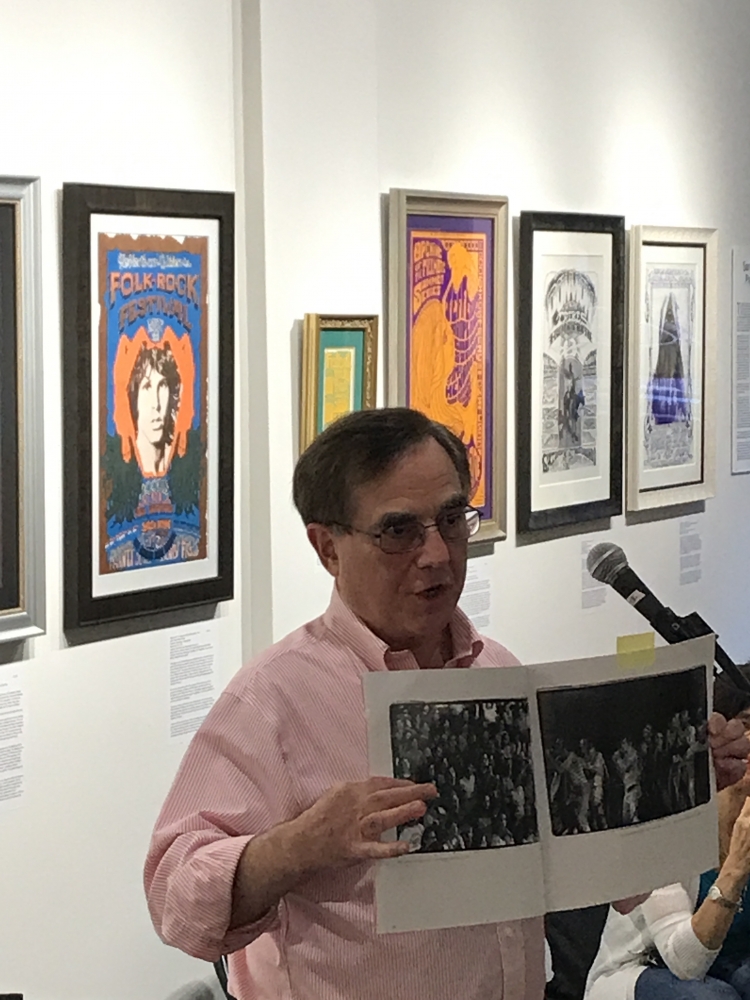 More than 80 people attended a very special event at the Bahr Gallery on Sunday August 18 from 6-8pm featuring a Woodstock reunion, unique music from the period, wine and cheese and all surrounded by posters featuring Woodstock and the bands that made it happen! Guests were also treated to a visit by Sha Na Na co-founder Rob Leonard, who regaled the crowds with stories of his personal  experience on and off stage with Jimi Hendrix, Janis Joplin and others.

Pioneer rock cello innovator, Aaron Minsky (aka Von Cello), was joined by Gold and Platinum record producer Lisa Ratner on keyboards as they play the music of bands from the era.  The highlight of the evening was when Von Cello played a spine-chilling and magical rendition of Jimi Hendrix's Star Spangled Banner on the electric cello.

Four other speakers came up and shared some of their Woodstock rememberances with the crowd - who says if you can't remember it you weren't there!

Enjoy some pictures from the event below and for more information on Von Cello, click HERE

Music filled the air - just like 50 years ago at Woodstock!

Howard Kroplick from Roslyn recounted a near-riot at a Newport festival just 2 months before Woodstock.

Way too young to have been at Woodstock!

Larry Aarons had to choose between his new wife and Woodstock. 50 years later, they both know he made the right choice!

Jerry Wolfert of Cold Spring Harbor.  Something about naked motorcycling....

even Jimi himself made an appearance!

Rob Leonard from Sha Na Na: Among other things learned from Jimi Handrix was how to do tequila shots with lime and salt!

Plenty of amazing art from the late 1960s to take in!

Always a fun evening at The Bahr