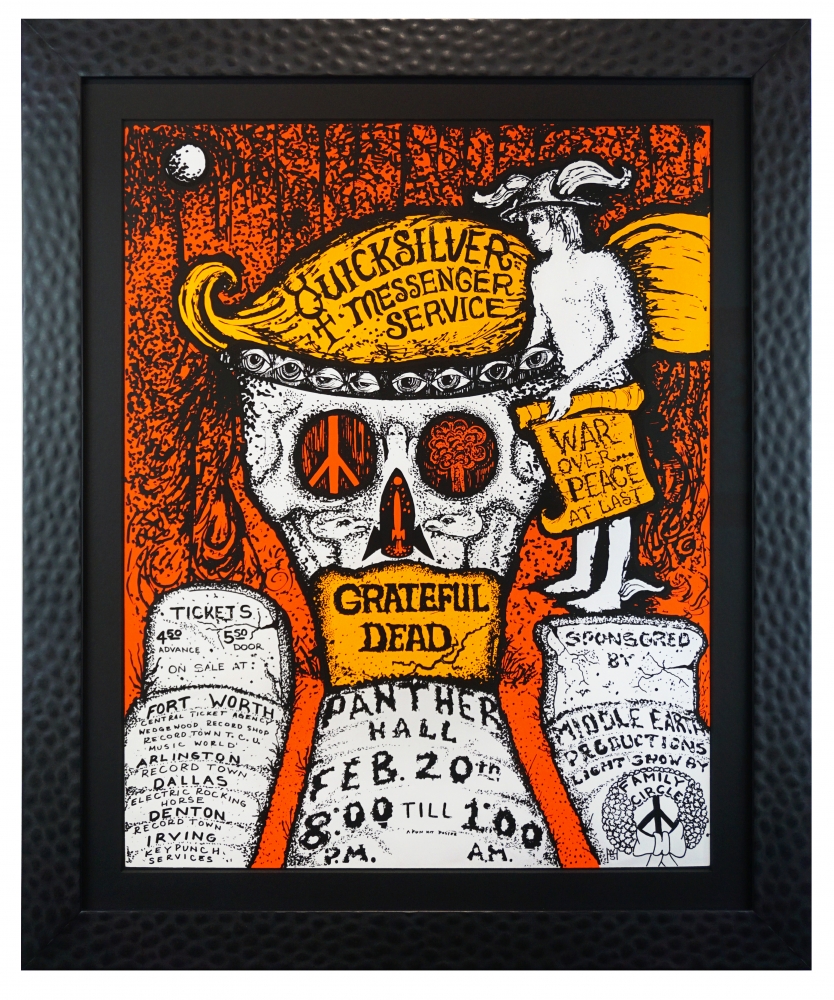 The centerpiece of the Exhibition is 7 large serigraphs that have been augmented by hand with watercolor by Stanley Mouse. The set of portraits and one group shot were created in 1988 for the original artwork for the album, “Workingman’s Dead,” which was released 50 years ago in 1970. Many new works from 1966-1969 showcasing the psychedelic poster revolution in that period will also be displayed.

Other highlights include the famous 1966 “Skeleton & Roses” poster by Mouse and Kelley that became a core part of the Dead’s iconography as well as a first edition “Radio City,” pieces from The Garden 1988 shows, 1987 Spectrum, 1970 GD & Miles Davis, and many works from 1966-1970. More than 40 works in total comprise the Exhibition.

BROWSE THE SHOW and all of our Grateful Dead works online HERE.

Virtually all pieces are first editions, printed before the concert occurred and are accompanied with meticulous background and history, placing each piece in context. Much of this art currently hangs in the Smithsonian, Metropolitan Museum of Art, MOMA, the Louvre, and other leading museums and institutions around the world.

“We are curating the visual experience for admirers of this art, the music, and its special time in history,” said gallery owner and curator Ted Bahr. “It’s time for these 50-year-old works of art – already highly prized by collectors and connoisseurs of the period – to be properly displayed in a beautiful, elegant setting as they seek new homes.”

The Bahr Gallery, which opened in April 2018, has several rooms totaling 1,200 square feet and features nearly 60 psychedelic master works on rotation. Past Exhibitions include “Woodstock and Other Festivals,” and “The British Invasion.”

The opening of The Bahr Gallery continues the recent renaissance in Oyster Bay, marked by a slew of hot new restaurants, innovative family attractions, and its proximity to the Long Island Sound. The Bahr Gallery is open Thursday through Sundays from 1:00-6:00pm and by appointment.