Close-up of frame at angle

Close-up of frame at angle 2 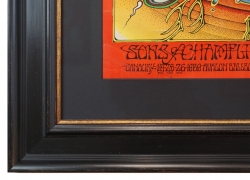 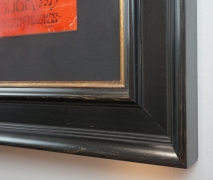 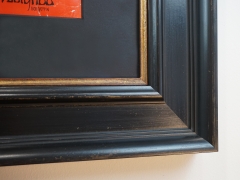 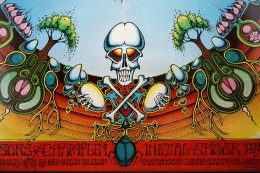 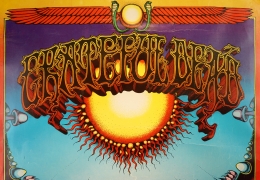 Note: Sold. We'll be on the lookout for another one but it could be a while. Please contact us if you would like to be notified when we locate another. We will locate one. Just a matter of time....   ted@bahrgallery.com

Considered by many to be one of the greatest rock posters of all time, this classic Rick Griffin design is known as “Aoxomoxoa,” and was later used as the title and cover design for the Grateful Dead’s third album. After the Family Dog left the Avalon Ballroom, Soundproof Productions became the first company to produce rock shows there. This poster was used to promote the very first Soundproof show in January 1969. There are numerous bootlegs of this psychedelic masterpiece, as well as at least 5 reprints. This is the real thing, an original, pre-concert printing.

Griffin’s artistic genius shines brightly in this poster from the incredible lettering to the sexual symbology.  The band’s name is spelled out in an ornate mutant gothic typeface that arcs across the spherical space surrounding the solar ovum, bulging out toward the viewer with elaborate shadows that make the words look like cast metal or carved wood. It’s a crowning bit of typography for one of Griffin’s most intricately constructed symbolic landscapes.

Here we see virtually all of Griffin’s psychedelic vocabulary of symbols, glyphs and icons -  almost a language unto itself. Skulls, eggs, fetuses, the Sun, mushrooms all clamor for your attention with Griffin's unsurpassed lettering finishing off the piece in absolute splendor. The top depicts a sun which doubles as an egg being fertilized and the lettering is topped with Egyptian-based imagery. The bottom portion depicts death, rebirth and the cycle of life, with fertility symbols and a terrific grinning skull.

Six months after this show, the Dead selected this image as the cover artwork for its third  album. The title of the poster and album is a palindrome created by cover artist Rick Griffin and lyricist Robert Hunter. One fan legend considers the words "Grateful Dead" on the front of the album to be an ambigram that can also be read "We Ate The Acid". Grateful Dead drummer Bill Kreutzmann writes, "Aoxomoxoa...doesn’t mean anything — it’s just a cool palindrome. People have surmised over the years that you could read the Grateful Dead lettering on the front cover as We Ate the Acid which, I suppose, is true enough, if you look at it just right.