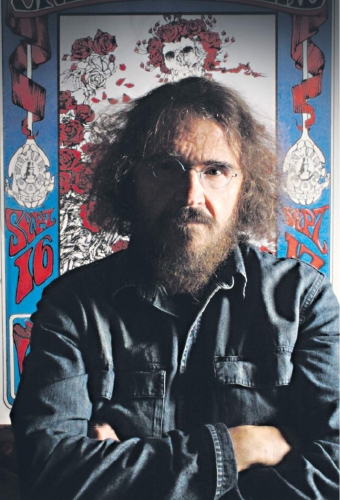 Born in Fresno, California, Miller grew up in Detroit. He was given the nickname Mouse as a ninth grader. He was expelled from Mackenzie High School (Michigan) in 1956 for mischievously repainting the facade at The Box, a popular restaurant across the street from Mackenzie. Mouse completed his formal education at Detroit's Society of Arts and Crafts.

By 1958, Mouse had become fascinated by the Taint movement that had begun in California a decade earlier. Having developed skills using an airbrush, he began painting t-shirts at custom car and hot rod shows. There he met and worked with Ed "Big Daddy" Roth, the leading exponent of Weirdo Hot Rod art. Mouse was also strongly influenced by the art of Rick Griffin, with whom he would later collaborate on posters and album covers. In 1964, he was invited to help in the design of Monogram automobile model kits using the "monster" cartoon characters he had developed to compete with Roth's "Rat Fink" character.

In 1965, Mouse travelled to San Francisco, California with a group of art school friends. Settling initially in Oakland, Mouse met Alton Kelley. Kelley, a self-taught artist, had recently arrived from Virginia City, Nevada, where he had joined a group of hippies who called themselves the Red Dog Saloon gang. Upon arrival in San Francisco Kelley and other veterans of the gang renamed themselves The Family Dog, and began producing rock music dances. In 1966, when Chet Helms assumed leadership of the group and began promoting the dances at the Avalon Ballroom, Mouse and Kelley began working together to produce posters for the events. Later the pair also produced posters for promoter Bill Graham and for other events in the psychedelic community.

The psychedelic posters Mouse and Kelley produced were heavily influenced by Art Nouveau graphics, particularly the works of Alphonse Mucha and Edmund Joseph Sullivan. Material associated with psychedelics, such as Zig-Zag rolling papers, were also referenced. Producing posters advertising for such musical groups as Big Brother and the Holding Company, Quicksilver Messenger Service, and Grateful Dead led to meeting the musicians and making contacts that were later to prove fruitful.

In 1968, Helms and Graham began turning to other artists for their poster work, and Mouse's career languished. After brief periods in London and Massachusetts, he moved to Toronto where he ran a Yorkville waterbed store called The Waterbed Gallery. Mouse returned to California to live in Marin County near Kelley. The pair resumed their partnership in 1971, producing commercial artwork related to the Grateful Dead and later Journey. The pair are credited with creating the skeleton and roses image that became the Grateful Dead's archetypal iconography, and Journey's wings and beetles that appeared on their album covers from 1977 to 1980. Mouse and Kelley continued to work together on rock memorabilia until 1980.

Mouse continued to produce album cover art and other music-related graphics through the 1980s. Early in the decade, he moved to New Mexico where he began producing fine art in a variety of media. In 1993, Mouse required a liver transplant, which the Grateful Dead raised money to pay for. Mouse now lives in Sonoma County, north of San Francisco where he continues to paint.