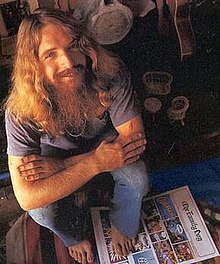 Richard Alden Griffin was born near Palos Verdes, California in 1944. Rick learned to surf at the age of 14 at Torrance Beach. In high school in the 1950’s, Rick began copying images from Mad Magazine and then developed his own style of surf doodles. Rick's friends would pay him 50¢ for an original piece penned on their shirts. Rick was also interested in Hot Rod cars and motorcycles, their decoration being amongst his earliest professional work.

Soon after leaving Palos Verdes high school, Rick became staff artist at Surfer Magazine and there created the character of Murph, a character who became integral to the Californian surf scene. Rick parted company with Surfer in 1964 and hitched a ride toward San Francisco. After Rick's left eye was dislocated in the accident (perhaps the inspiration behind the disembodied eye in his subsequent work), his art also became more sophisticated and the characteristic fluid lettering style emerged. His time at Chouinard Art Institute, (now Cal Arts), was to shape Rick's future life.. After taking time out for a Mexican surf trip, Rick drove to San Francisco in late 1966, living, initially, in their van. Rick produced one of two posters for the Human Be-In held January 14, 1967 in Golden Gate Park, advertising the "Gathering Of Tribes", showing a guitar toting Indian on horseback.

As the Haight-Ashbury scene developed, Rick's work was in high demand. Drawing on influences as diverse as Native American culture, the Californian surf scene and of course, the burgeoning hippie movement, he incorporated beetles, skulls, surfing eyeballs, vivid colors and wild lettering into his art. Rick produced a series of seminal posters for Chet Helms, a producer of The Family Dog collective, and Bill Graham, who staged events at the Avalon Ballroom and the Fillmore Auditorium respectively. He made posters for legends such as Hendrix, Albert King and the Grateful Dead, and many others. He created the logo for Rolling Stone magazine, and many album covers; perhaps the most well-known being the Grateful Dead's third album, Aoxomoxoa in 1969.

Along with Alton Kelley, Stanley "Mouse" Miller, Victor Moscoso and Wes Wilson, Rick became known as one of the "Big Five" of psychedelic art. In 1967 they founded the Berkeley-Bonaparte distribution agency to produce and sell psychedelic poster art. He oversaw the lithography, ensuring a flow of quality artwork by himself and other leading artists, destined to grace the walls of the enlightened to this day. His famous 'Flying Eyeball' poster ranks as one of the most important of the time and is sought after by fans and modern art museums alike. Although at the vanguard of the psychedelic art movement, Rick was also well-known for his contibutions to underground comix where his work can be found in Zap, Snatch, Tales From The Tube and others..